Pitfalls is a performance that brings disparate components together to fight it out within a physical environment governed by ridged formal structures and rules. Inspired by a found text, an obscure scientific paper entitled Pitfalls in the Environmental Interpretation of Insect Death Assemblages, a study of insect remains found in a drain in York, the work is structured around a presentation of Morris dancing stripped back to emphasise the dance’s formal similarity to 1960s New York Post Modern Dance. The Morris Dancers are joined in the space by stick figure puppets (just walked in from a scientific diagram) who also want to dance, and their controllers. Finally, there is a scientist whose job is simply to clear the space and gather up all material found, be it Morris Dancer, Puppet body part, or puppeteer. This is all performed to a soundtrack consisting of a performed reading of a transcript of a discussion by the performers on the meanings and possible narratives behind the original text. The piece is about the conflicts, mistakes, improvisations and unpredictable encounters that occur when different physical motivations clash within a set choreographic structure. 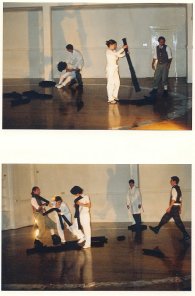 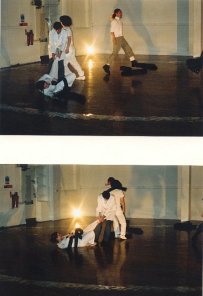 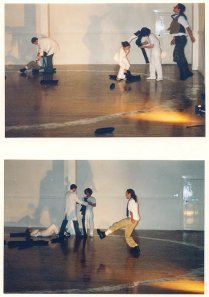 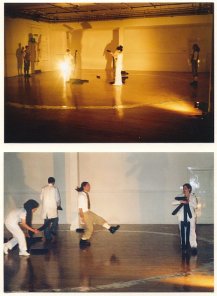